I have a number of additional projects to improve the AuTest framework for use with Traffic Server.

It should be possible to have run tests using only a replay file and potentially some configuration information, without any Python code at all. This requires the micro-DNS server.

Frequently the literalness of the gold testing is a problem. AUTest should have comparators that are specialized for HTTP headers. This could be worked in to the replay file format with metadata indicating which headers should be literal, vs. present/absent vs. irrelevant. Replay file based testing would greatly benefit from this.

At one point the technology existed to capture traffic for traffic replay. This should be resurrected and improved. After discussion among the group it seems that for replay purposes literal content is unnecessary, only the size matters. It is still debated if full capture is useful for debugging purposes. My opinion is it is not and complicates the capture process unnecessarily.

I think in terms of building out the replay tooling we need a plugin that can to some extent record traffic. The data recorded should be in the replay file format and contain

It would be nice to be able to run AUTest against live production systems to verify behavior, particularly with regard to paranoid requirements.

AuTest could be integrated with configuration management. This would involve setting up a Traffic Server instance with a proposed configuration deployment in a non-production environment and then verifying various functional properties. This would similar to production verification but presumably more thorough and focused on operatoinsl needs.

Each transaction can also have a UUID which can be used to specify the appropriate response. The UUID can be sent along with the transaction as an extra header if needed. Otherwise the transactions must be matched up based on other data in the request. 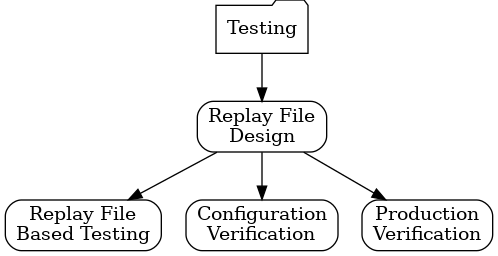